from French in Ann Arbor 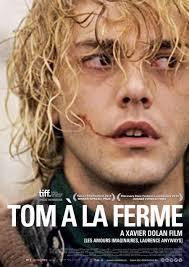 Controversial, award-winning Canadian director Xavier Dolan presents this Hitchcockian suspense drama. Dolan stars as the eponymous protagonist, a hipster who leaves the city to attend the funeral of his partner, who hadn’t yet come out as gay to his family. Beleaguered by his partner’s despondent mother and bestial brother Francis, Tom is soon trapped in a twisted game. Francis is such a threatening figure that Tom’s intended drive back to the city quickly assumes the urgency of a daring escape. But a logistical hiccup compels Tom to turn around and head back to the farm. Increasingly turned on by the vicious Francis, Tom ends up carrying out rustic chores and withstanding physical abuse. The scenario is further complicated by the farm’s obscure past that ominously bodes greater darkness ahead. Simultaneously creepy and compelling, this 2013 VENICE FILM FESTIVAL WINNER boasts of gorgeous cinematography and a striking musical score.

A little late at night, but very worthwhile!

먹튀검증 Hello! Nice to meet you. 먹튀검증First of all,안전놀이터 thank you very much for 토토사이트providing us with this variety of information. 꽁머니I think it's information that can be used in many ways.안전놀이터 I can't imagine how much effort you've made to write this. 스포츠중계Thank you for your hard work.꽁머니 I would appreciate it if you would continue to provide us with such information. In addition, 먹튀검증 COVID-19 is becoming a problem all over the world these days. 안전놀이터 I hope there's no harm to you and your family. 토토사이트Thank you 먹튀사이트검증 Have a good day! 안전한사설토토사이트 if you visit my site.공식안전놀이터 I'll look forward to 사설안전놀이터

rabia
over 1 year ago

Thank you for taking the time to publish this information very useful! Private and Public Instagram Account

This session has passed.

This event has 100 seats left

Wait!! This class is in Ann Arbor, MI, which we think is kinda far away from .

If you're no longer in change your location here , or continue signing up for this class

Any criticism will make us work harder. Any praise will make our day. Send us love/hate notes!

HourSchool, Inc. 2013
Aspire to inspire from the heart of Austin, Texas